The Ford Motor Company Falcon XY GT is a sports sedan based on the Ford Falcon XY. Released in 1970 by Ford Australia, with the GTHO Phase III released in 1971. Some 1,557 units were produced from September 1970 to December 1971 with 300 GTHO Phase IIIs produced from May 1971 to November 1971. It was the fourth in the initial series of the Ford Falcon GT. A limited number were exported to South Africa, wearing Fairmont GT badging. The Fairmont GT model is starting to increase in value as Falcon GTs become harder to find and buyers beginning to see the Fairmont as a genuine GT. 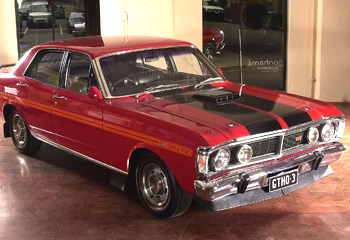